Kenna and Cassie were greatly on my mind today so I thought that I would share a couple of photos of them with you.

They loved it here on the ranch. McKenna was actually a pretty good, little sheep herding dog. Cassie was our short legged guard dog. She thought that she could take on ANYTHING and actually tried it more than once.

They were wonderful friends Kayrn and I thank each and every day that they were in my life.

They didn't spend a lot of time at the groomers. I usually took them in 2 times a year. Though I loved them with their spiffy, groomed cuts, I also adored them just being my scruffy looking babies.

We live on a sheep ranch right on the Yakima River and they spent most of their waking hours outside roaming the ranch always in search of what might be hiding in the sprinkler pipes or what might be lounging down along the river bank. They especially loved to ride on the 4-wheeler with me when I was out checking sheep or doing the irrigating. McKenna would run clear across the pasture to hitch a ride with me.

She was a sight to see with your nose pointed up, the wind blowing through her hair and her darling little tongue sticking out. She was a very good rider. Of course we never traveled at a very speedy pace but non the less she thought that she was quite the little biker dog.

The animal hospital called today saying that Cassie's cremated remains were ready to be picked up. I have a perfect spot picked out in my garden where she used to lay by me whilst I was out planting or pulling weeds.

After McKenna crossed the Rainbow bridge I found a wonderful Scottie cement statue on eBay that I purchased in remembrance of her. I have it out in the garden along with a remembrance plaque. As soon as I get Cassie Mae home I will once again have her out in the garden with me. Always making me smile and reminding how lucky I was to have her in my life.

Below are the 2 photos that I wanted to share with you.
The first is of myself, my grand-daughter and McKenna (black) and Cassie (wheaten). They were actually groomed in this photo. They loved to ride on the hay trailer when we were feeding the sheep. It was a beautiful day on the river that day! The second photo is once again of my grand-daughter, Kenna and Cassie sitting in the basket of the 4-wheeler. They seldom rode in the basket but it seemed appropriate for this photo opportunity. Both photos were probably taken about a year and a half to two years ago. 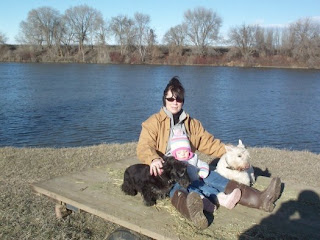 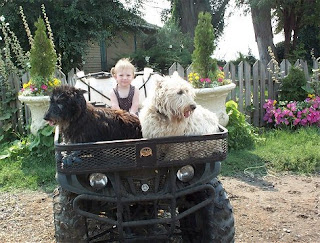 They were ALWAYS together. I think that may be one of the reasons that they passed away so close together. Neither of them had much to do with the other two dogs in our family. It was kind of like they had their own little club that no other 4 legged animal could join!!

I have downloaded your purchase contract and will be most likely filling it out in the near future so that I can welcome a new Scottie into our home. It seems early to be bringing a new friend into our lives but I think that it just might be the right thing to do.

Thanks for everything Kayrn and thank you especially for providing me with the privilege and honor of "sharing" 10 wonderful years with my beloved Scotts. I NEVER "owned" them. It was quite the other way around.

Kindest Regards
Connie
Posted by Montgomerie of Camas at 3:52:00 PM