I'm sorry it has taken me so long to give you an update of Allister.
Let me just tell you that he is the most amazing thing to come in to our lives. He comes everywhere with us and we are so proud to have him.

He has the sweetest personality and is naturally very well behaved. We are rounding out the end of the potty training phase. The first month was so difficult because he was so small and low to the ground that we couldn't tell if he was going or not. But we have a routine now and he has learned quickly.

We had a scary incident a short while ago. We went to a park near out apartment for some exercise and a golden retriever attacked him. It happened so fast and luckily no long term or serious damage was done. But for a few days we were really shaken up. He was back to himself in no time. We now take him to a different school park near our house and he loves the freedom of running around. There aren't too many other small dogs there so he is short of some small playmates, but he gets good exercise trying to keep up with others. He will also chase if you take of running in the field. It's great exercise for us too!!!!!

We have taken him to Sunriver, Oregon where it snowed about 8-10 inches this last new years and he loved it. He adapted to it very well and loved running through the deep snow. We have taken him to the beach twice and he has a great time there too. He didn't care much for the water but enjoyed running around on the sand.

We have him crate trained but we also gave in and let him sleep with us from time to time. He is just big enough now to jump on and off the bed and the couch. He has numerous doggie beds around the house, one which we got him when he was a puppy. He still like to sleep in it, but he spreads it to his limits because of how much he has grown. We have attached a picture of his favorite sleeping position.

We are so happy to have him in our lives and getting a Scottie was the best choice we could have made. It has made us realize that we need more of them. Don't be surprised if you hear from us again in the future!

We hope all is well with you. 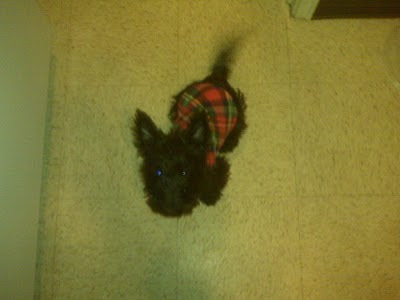 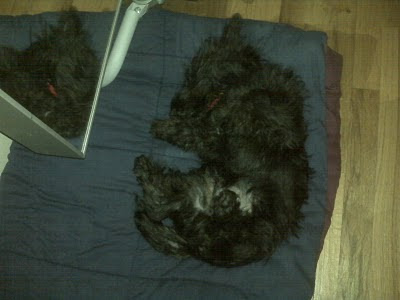 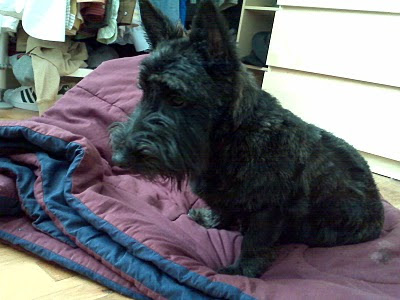 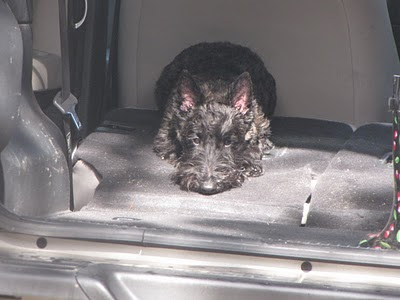 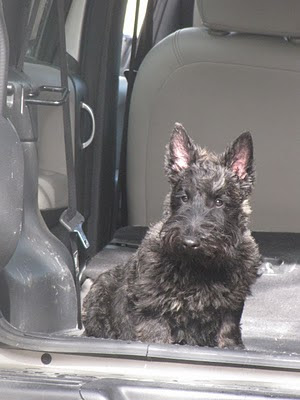